Acanthocardia paucicostata (G. B. Sowerby II, 1834), the poorly ribbed cockle, in the UK

Citation:
Barfield, P. (2017). First evidence of the poorly ribbed cockle, Acanthocardia paucicostata (G. B. Sowerby II, 1834) in UK waters. Journal of Conchology,  42(6), 537-539.
Below are three images of the first specimen of the poorly-ribbed cockle, Acanthocardia paucicostata recorded from UK coastal waters. The specimen was found in the west Solent area in 2016 (Barfield, 2017). The shell was given to the National Museum Wales for curation (Accession number: NMW.Z.2016.018.00001).

A second articulated, dead, specimen of A. paucicostata was collected by Sea-nature Studies in late 2017 from an intertidal site in the Solent. This specimen was slightly larger and measured 27.3mm (length) × 26.58mm (width) × 21mm (breadth). The new location was roughly, 5km from the initial find reported by Barfield (2017). Below are four images of this additional specimen of the poorly ribbed cockle, note the fine riblets or, striations between and across the ribs (bottom right). This specimen is also being curated by the National Museum Wales. 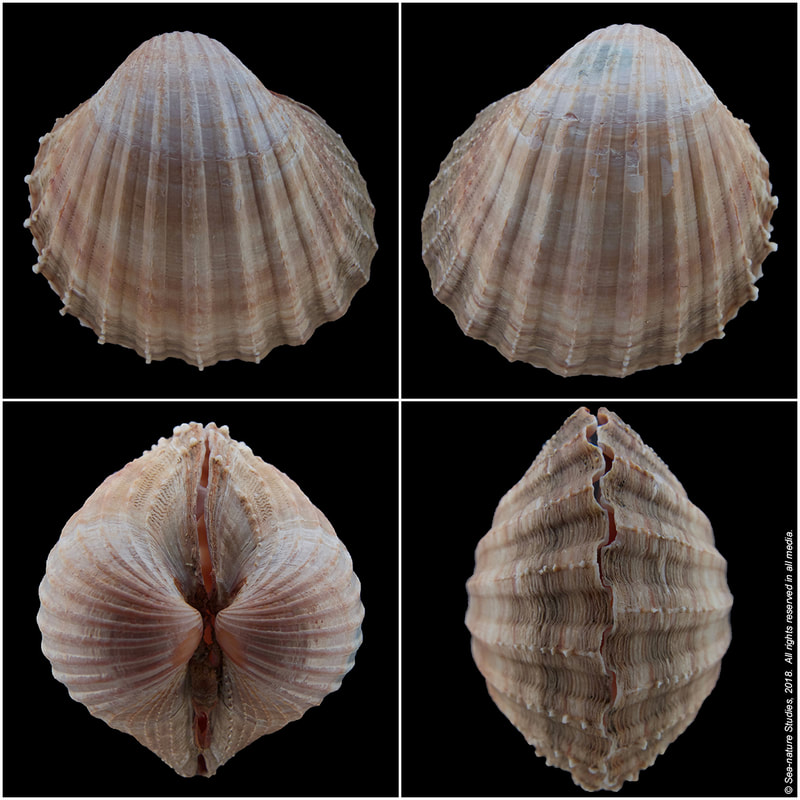 Many dead specimens have been collected subsequent to these initial finds and in autumn 2019 the first live specimen was collected indicating that the species is living in the Solent (Barfield 2021). This single live specimen was washed up by rough weather and is currently stored awaiting molecular analysis. A short video of this find is available on the Sea-nature Studies YouTube Channel.

The overall distribution in the Solent as indicated by shells found in the intertidal death assemblage to date is relatively broad spanning some 10-15km. It is likely that the species has been present in the Solent for an extended period. 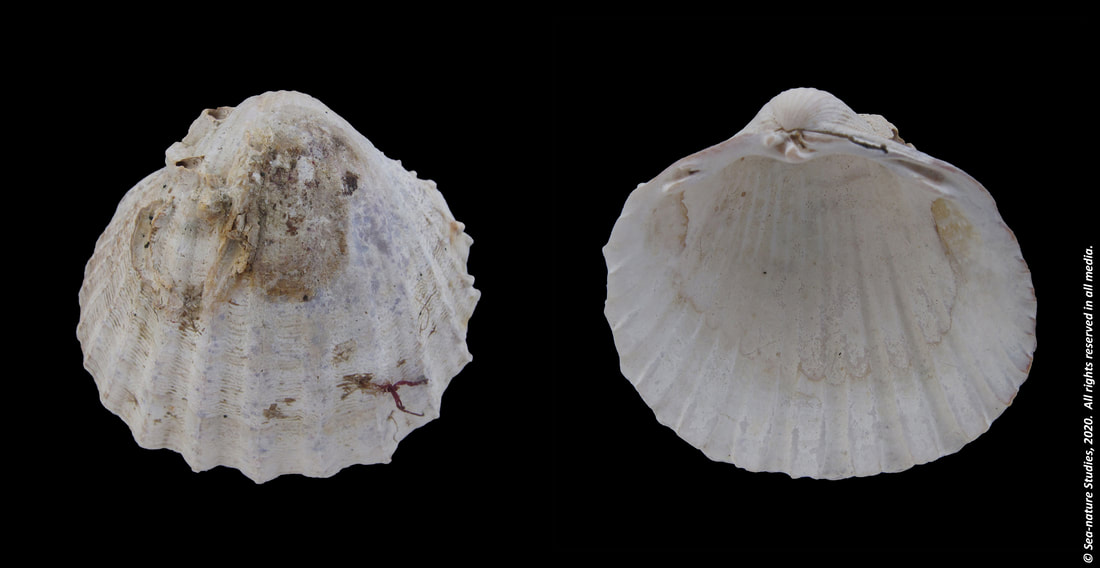 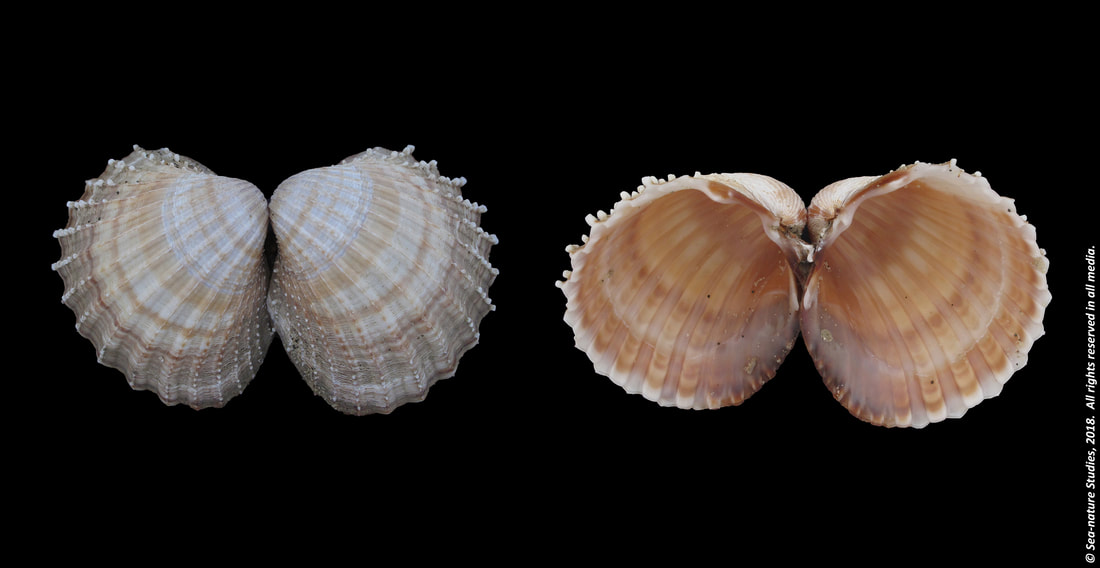 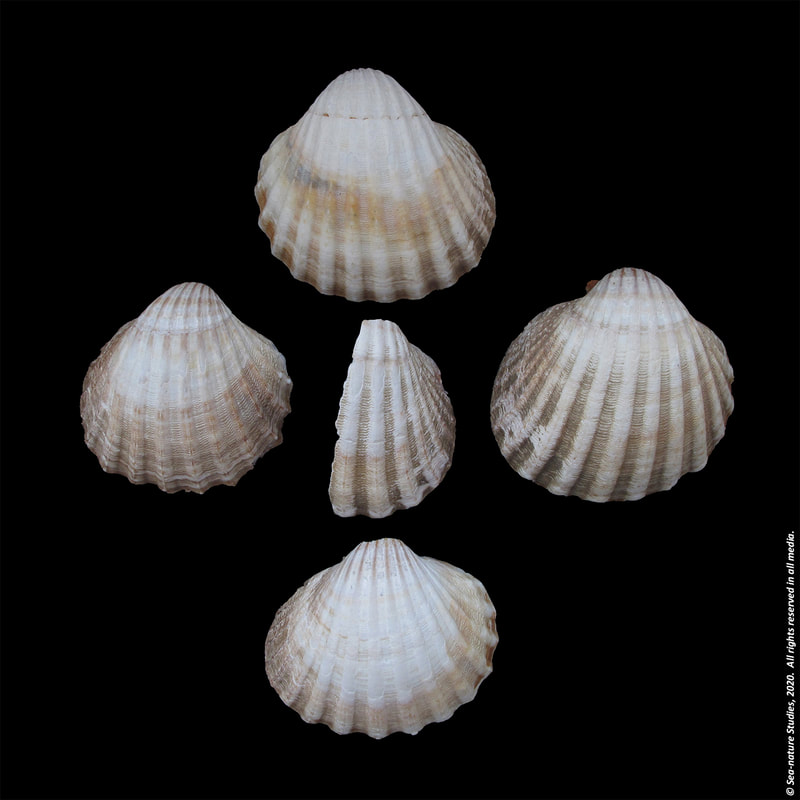 Four single valves and a fragment, found in close proximity in the death assemblage of a site more than 10km from the original find.
Reference
Barfield, P. (2021). First record of a live specimen of Acanthocardia paucicostata (G. B. Sowerby II, 1834) from Britain and Ireland. Porcupine Bulletin 16, 52-55. ISSN 2054-7137.