Notes on the natural history of the sea-slug, Aeolidia papillosa (Linnaeus, 1761). 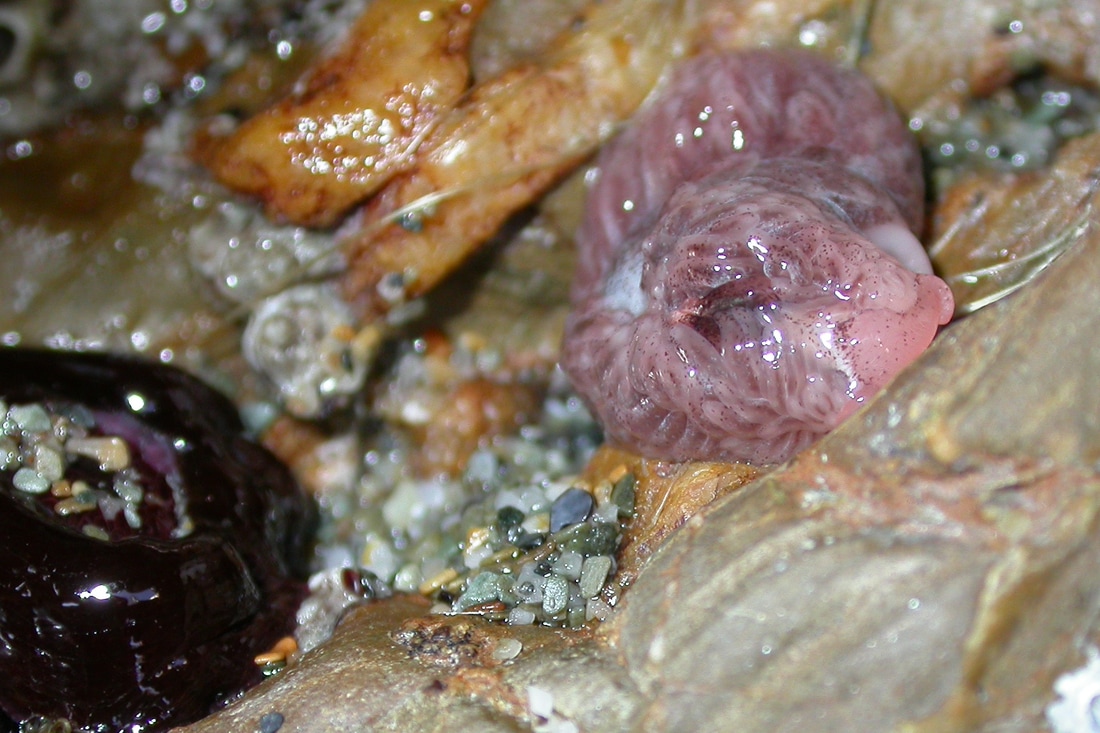 Aeolidia papillosa (Linnaeus, 1761), or the common grey sea-slug, is found on shores and in shallow water all around the UK.  The animal pictured was at around the mid-shore level having been uncovered by the ebbing tide on the north coast of Cornwall on a sunny day in February 2003.  As the colouration indicates the common grey sea-slug may not be grey at all and identification guides note a range of possible colour types from white to purple-brown.

Distribution:
The common grey sea-slug has a wide geographic distribution globally, occurring on most north temperate shores.  It is the largest member of the aeolidiidae that we have and can grow up to 120mm in length, though this is the exception rather than the rule.  Despite the fact that it is large, widespread and common I rarely encounter this beast on my trips to the north coast.  But then Aeolidia papillosa is a predator, with a position higher up the food chain and therefore it’s abundance is inevitably less dramatic than those animals which dominate this exposed coast.  It is thought to live for about 1 year.

Caught out of water the slug appears thoroughly unimposing.  The real drama does not begin until the flood tide once again covers the shore beneath a cloak of seawater…

Food:
Aeolidia papillosa feeds on sea anemones showing a clear preference for beadlets, especially Actinia equina, the radially beautiful and deep-red anemones that pepper the shores of north Cornwall. Note the presence of a somewhat ragged looking beadlet anemone just to the left of the slug pictured above. Aeolidia will also feed on other anemones such as the strawberry anemone, Actinia fragacea, the snakelocks anemone Anemonia viridis, the Dahlia anemone Urticina felina and Sagartia elegans, though it is much less partial to these last two.  Unless otherwise stated the description which follows is based on an encounter of Aeolidia with Actinia equina, it’s favoured prey in UK waters.

Hunting:
Aeolidia papillosa has a chemosensory ability and it uses this to hunt out it's prey.  Using specialised sense organs such as the dorsally prominent paired rhinophores (‘rhino’ is Greek for ‘nose’) and the oral tentacles each side of it’s mouth, as well as other chemo-receptors, also on it’s head, it will seek to get a lock onto the scent of it’s prey and then swivel towards it.  Even weak trails can be followed as this sea-slug is skilled at detecting small increases in chemical concentrations and tracking up these invisible gradients to the source.  When it finds a tell-tale trace it will swing it’s raised head from side-to-side, rhinophores quivering forwards and upwards, oral tentacles stretched out laterally and also searching forwards.  The thread of a scent detected, Aeolidia begins to move rapidly towards the source.

First contact:
It’s out-stretched oral tentacles may well be the first to touch the anemone.  The sea-slugs reaction is too move it’s head back, contract the oral tentacles, whilst defensively pivoting the finger-like ‘cerata’, which cover it’s back, up and forward in the frontal region.  At the same time the sensitive rhinophores are shortened and bent back and downwards to lay protected amongst the cerata.  It is likely to have been stung in this brief engagement, especially if the oral tentacles happened to touch the anemones own tentacles rather than it’s stout column.  Both of these areas on the anemone house some of the specialised stinging cells or nematocysts with which it defends itself, but they are more numerous in the tentacles.  Meanwhile the anemone swings these tentacles in and back onto the oral disc.

Unperturbed the hunter re-extends it’s head, oral tentacles, and out through it’s mouth shunts a proboscis tipped with a set of jaws.  This eversion heralds the imminent start of feeding.  For a short while the oral tentacles and proboscis slide over the column, perhaps seeking for a suitable place for the first bite.

Actinia bends in the column where it has been touched so that the top bows over towards the aeolid.

Defence:
The sea-slugs primary defence against the stings from the anemones nematocyst cells is mucus.  It secretes a thick and sticky sheath of mucus, particularly centred around the head area.  The mucus is an effective barrier, into which nematocysts may discharge harmlessly, flecking this colloidal screen with little patches of lightning white in the process.  This is especially useful in attacks on Anemonia viridis which does not cease in it’s attempt to sting the attacker with it’s tentacles.

Remarkably Aeolidia papillosa can ingest the sting-cells, or nematocysts, of anemones and then transfer these to the tips of the finger-like processes, or cerata, along it's back, using them in its own defence.

This gives a clue to understanding the scientific name, Aeolidia papillosa, for this sea-slug.  In Latin ‘Aeolus’ means changeable (according to Homer, Aeolus was god of the winds, hence also, perhaps, the saying, ‘as changeable as the wind’) and papillosa is a nipple or teat.

Feeding:
Aeolidia maintains contact with the column of Actinia and the open jaws try to bite onto a part of it.  It’s not entirely clear if the jaws cut or rasp off tissue but when they succeed the abrasion on the column is clear.

Not surprisingly the anemone’s reaction to being bitten is more dramatic than at first contact.  The tentacles are violently withdrawn back onto the oral disc and covered by the closing of a sphincter.  The column shortens as the anemone seeks to withdraw the area bitten from contact with the aeolid.  In this semi-protective ‘beadlet’ state the pedal disc also begins to withdraw away from the sea-slug.  This action is often followed by the anemones gradual movement away from it’s attacker on small waves of contraction that ripple slowly across the pedal disc.

Bites are taken at 10-20 second intervals but as feeding continues Aeolidia will pause for several minutes and these pauses increase in duration and may last up to several hours.  If the anemone doesn’t escape then Aeolidia feeds until satiated.  Within the mouth a chitonous cuticle protects many aeolids from being stung there.

Aeolidia can move up to 100 times faster than Actinia but because of the increasingly long pauses it takes during feeding the Actinia’s attempt to escape is not as futile as it appears.  Unfortunately a damaged anemone is more easily tracked.

Moving also benefits the anemone in another way and perhaps, in terms of it’s evolution, this is an additional reason why locomotion is favoured in Actinia equina.  In order to move the anemone uses it’s hydrostatic skeleton, inflating itself in the process.  This inflation makes it harder, in a very physical, practical sense, for the attacking Aeolidia to bite the anemone.  When an attack stops the anemone may keep moving for several hours.

If, despite it’s attempts to escape, the attack continues for a long time the anemone will, as a last ditch effort to evade being further consumed (!), detach itself from the substrate under-foot.  This is a drastic measure because once detached it may be swept into wholly unsuitable habitat and thus die anyway.  However, once left alone a detached anemone can re-attach in 10 minutes.

Reproduction:
Sea-slugs are hermaphrodites and Aeolidia papillosa is no exception.  Although hermaphrodites can self-fertilise this is rare in nudibranchs and most will copulate.  During the reproductive period A. papillosa continues to direct a lot of energy to somatic growth.  This may be in part because a larger body size makes it easier to prey on the available food items.  Spawning adults survived until mid-July when mean water temperatures were 14.3 degrees C.  The larvae are planktotrophic free-swimming veligers.  Life in the plankton is very hazardous and mortality is high in this phase of development and dispersal.  The warmer the conditions the faster the development process.  By spawning during a period of increasing water temperatures Aeolidia decreases the time it’s offspring will have to spend in the plankton.  To ensure successful spawning A. papillosa will undergo ‘de-growth’, using the breakdown products from this autolysis (in Greek, ‘lysis’ means loosening) to support reproduction.  The onset of death may therefore be precipitated not least by the action of spawning.

Curiosity:
On the Canadian pacific coast Aeolidia papillosa feeds preferentially on Anthopleura elegantissima, an anemone which is not found on our own shores.  Anthopleura elegantissima has a symbiotic relationship with two types of algae which live within it’s tissues.  The algae photosynthesize in this protected and stable environment and the anemone receives some of the products generated by these tiny plants.  The two types of algae present are collectively known as zooxanthellae and zoochlorellae.  The latter is a unicellular green algae and the former are diatoms of the genus Symbiodinium.

When Aeolidia consumes Anthopleura the ingested algae are not digested but transferred to the sea-slugs finger-like ‘cerata’.  In this new environment the algae continue to live and photosynthesize to the benefit of their new host though at no time are Aeolidia dependent on the symbionts that they briefly house.  Indeed the aeolid is unable to control these temporary tenants, by either expulsion or retention, even in starvation conditions.  However by feeding frequently on Anthopleura the population of symbionts in the cerata can at least be maintained.  There is no discernable impact on the algae during this passage from one host to another and out again.  It should be noted that the zoochlorellae may behave parasitically in low light conditions and could therefore be detrimental to the host during winter.

The snakelocks anemone, Anemonia viridis, in our waters is also home to algae of the genus Symbiodinium.  As Aeolidia papillosa can feed on Anemonia viridis in our own waters does it develop a similarly symbiotic relationship with the algae as a consequence of this?

References:
The following references were consulted in the production of much of the above material, though any mistakes, musings and misapprehensions are (as ever!) entirely my own.  The key paper was Edmunds et al (1976).

Mauch, S. and Elliott, J. (1997).  Protection of the nudibranch Aeolidia papillosa from nematocyst discharge of the sea anemone Anthopleura elegantissima.  The Veliger, 40(2), 148-151.

McFarland, F.K and Muller-Parker, G. (1993).  Photosynthesis and retention of zooxanthellae and zoochlorellae within the Aeolid nudibranch Aeolidia papillosa.  Biol. Bull., 184, 223-229.

Howson, C.M. and Picton, B.E. (eds) (1997).  The Species Directory of the Marine Fauna and Flora of the British Isles and Surrounding Seas.  Ulster Museum and The Marine Conservation Society, Belfast and Ross-on-Wye.


Citation: This article was originally published in the June 2004 edition of the Porcupine Marine Natural History Society Newsletter and can be cited as follows: